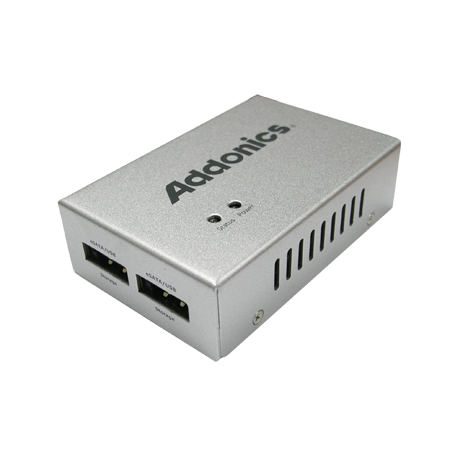 The NAS 4.0 is Addonics' 4th generation NAS adapter with several major enhancements. Comes with two eSATAp ports that allows attaching either two eSATA or two USB 2.0 storage devices onto the LAN, as many as 16 storages devices (or drive volume) can be attached to the new NAS 4.0 using USB hubs. With these many drives, you can easily share multi-Terabyte storage over LAN or build your own private cloud storage that can be accessed via the built-in FTP server.

Performance of the NAS 4.0 is quadrupled from the previous NAS adapter to 75 MB/sec over 1G network.Both the maximum number of SMB and FTP accounts as well as the concurrent users supported by the NAS 4.0 are vastly expanded to support over thousands and hundreds respectively.

The NAS 4.0 also support storage devices with multiple partitions, with each partition appearing as a share folder on the network. The supported file system now includes XFS, EXT2, EXT3, EXT4. NTFS and FAT32. A very large storage in excess of hundreds or thousands of Terabytes storage capacity can be easily built by attaching multiple units of Addonics RAID Towers or RAID Racks. A storage farm with capacity exceeding many commercial data center can be easily put together at just a fraction of the cost of an enterprise storage system. Storage capacity can be added to the NAS 4.0 in many many years to come without ever reaching the capacity limitation.

The NAS 4.0 has also added new powerful features beginning 6/16/2014 via a new firmware release. There are now full disk sharing and existing folder sharing from drives created by other systems. Shares can be applied to both FTP and SMB for different users and with different READ/WRITE privileges. These new features allows quick set up of sharing information on existing drives through LAN and WAN, making it an ideal tool for setting up a private Cloud storage. It is also a great tool for sharing information on existing drive on a private network such as at home or a temporary LAN without any elaborate administrative set up.

Constructed in a rugged metallic housing in the size of a cigarette pack, the NAS 4.0 adapter is built to last and can be deployed in home, general office, factory or mobile environment.

Illustration of a NAS 4.0 Adapter connected to the LAN and WAN 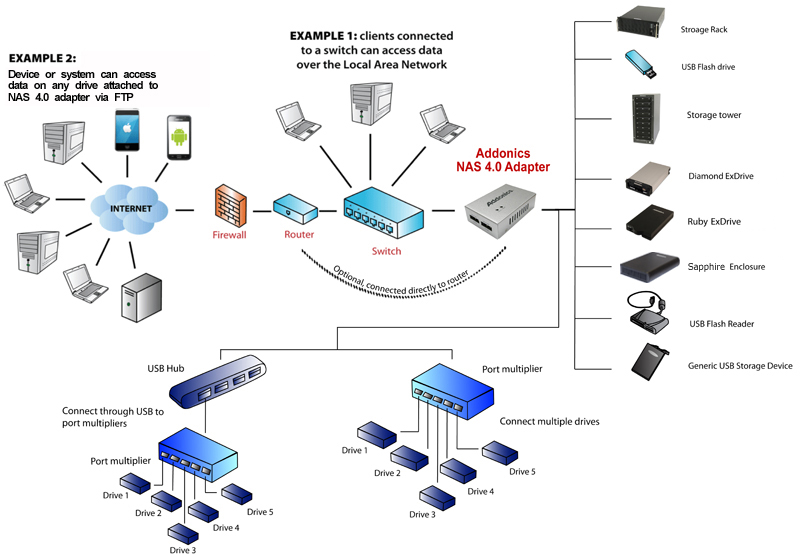 *USB hard drives over 2TB from Western Digital and Seagate such as the GoFlex series are not compatible, please see detail explanation in Q&A section

1. These new features are available on the latest firmware V98a.5. Products that are shipped after 6/15/2014 are loaded with the latest firmware. You may upgrade to the new firmware on your unit by going to the Support tab on this page and follow the firmware upgrade procedure.

2. Only folder name containing no space can be shared

When a hard drive is attached to this NAS adapter, a unique mount point is created in the NAS adapter to track this drive. This mount point is associated with the volume serial number (VSN) of the drive. The VSN is a unique # created by the OS when the drive is formatted. The SHARE configuration for each drive follows the mount point of the drive. So in situation where you want to switch out to a different hard drive and use the same share set up, the new hard drive must have the same mount point or VSN as the hard drive being replaced. You may use RAID 1 to duplicate the VSN on both drives or you may use this free software utility http://www.xboxharddrive.com/freeware.html to change the VSN on the drive.

NEW FEATURES: Share an entire drive or an existing folder.

BE SURE TO READ THE RELEASE NOTES FOR CHANGES AND INSTRUCTIONS.

BE SURE TO READ THE RELEASE NOTES FOR CHANGES AND INSTRUCTIONS.

A Windows utility to search for the IP address of the NAS 4.0 adapter on LAN.