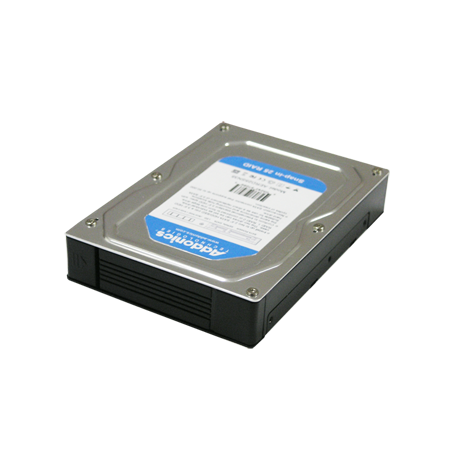 This Snap-In 25 RAID is a powerful drive e

The two 2.5" SATA drives can be standard 2.5" hard drive, Solid State Drive (SSD) or any of the Addonics 2.5" flash drive ( storage kit that enables CF, CFast or mSATA memory card to be used like 2.5" SSD). The two drives inside the Snap-In 25 RAID can be set to appear as two individual drives, a single large combined drive, a single drive volume in RAID 0 for fast READ/WRITE performance or RAID 1 for drive redundancy to protect against drive failure. Using fast solid state drive or high-speed flash media in a RAID 0 set up, the Snap-In 25 RAID can perform up to 3 Gbps in READ/WRITE, out performing most 3.5" SATA hard drives while consuming much less power and more resilient against shock and vibration. The Snap-In 25 RAID is an ideal solution for creating a large capacity and low cost SSD drive.

3. The Snap-In 25 RAID can be used in any drive kit or equipment that are designed for 3.5" SATA hard drive

Serial ATA host controllers to your systems to ensure the hot swap capability. New controllers from Intel and other suppliers may finally support this feature. Please verify with your controller manufacturer if you need to have hot swap in your application. Hot swap is supported in Windows 2000 and XP only. On other OS, drive can be removed without crashing system. But replacing with a different drive can result in crashing the OS.